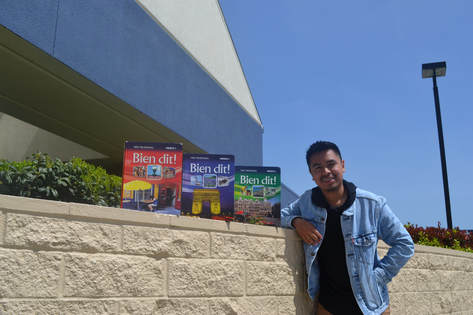 Eduardo Gonzales (‘18)  got a $1,000 scholarship from Alliance Francaise of Monterey with that money he took off a major amount from a program to study abroad in Belgium. “ It’s a lot more than I thought,” Gonzales said.
Since the minimum they could have given him was $300, and he was expecting around $500 when he got the scholarship he was very surprised. This scholarship plus other resource programs were a huge help for him to cover the $5,000 cost to Belgium leaving him to pay $600. Gonzales being enrolled in French for three years and participating in French poetry exhibitions got him to win 2nd and even 3rd place in poetry recitation and original poem. As he said “ better than nothing” meaning that it's also good getting a second or third place than nothing at all. I also asked him how was his learning environment in his previous french classes and his response was
“ ... I was always very proactive in my learning especially with Madame Long being as a good teacher as she was” His emotions are very neutral at the moment he doesn't feel anxious, or nervous.  Know all that awaits him in Belgium is the new food, new people, new places.